Over the past two months, I have been fishing some rods and reels from a company named Cadence Fishing. I had never heard of them until that point. When we think of fishing reels we usually think of the big names and those that have been around for years and years. A new company has some work to do to break into the market (and stay there) and after fishing some of their stuff...I think they just may do it.

I'm going to post several reviews in the future but wanted to start right at the top with their CS10 Spinning Reel which is their current highest priced reel that retails for $119. One of the biggest things about this brand is that they are affordable. Their direct to consumer approach leaves some room to lower costs and still be profitable and the result is better gear for you at a lower price.

Here are a few of the specs before I dig into my thoughts and performance of the reel.


If you look at those you will see they are premium features that a lot of other brands include in reels that are double the cost. Having fished many of those reels and this one, I can say that the performance is nearly identical with a much lower cost.

The reel that I own is the CS10-3000, a 3000 size reel that I have used for a variety of finesse presentations. The 3000, or 30, size works well for light braid like I use and the bigger spool is something I really like for its versatility compared to smaller models. 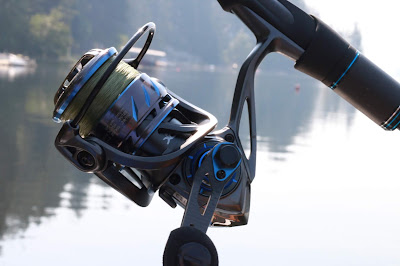 Fishing the reel has proven that the drag can handle bigger fish and I have been pleased with the results for both the drag, smoothness and how it has held up so far. It has only been two months, but so far so good on the durability.

Another few things I have liked about the reel is the carbon fiber handle. This looks cool but also helps to keep the reel fairly light. It weighs in at 7.3 ounces which is definitely on the lighter side for any spinning reel and much lighter than most of the other reels I checked out in this price range.

Having fished it pretty regularly since June, I haven't found anything I don't like about it. It has a nice comfortable knob on the handle and casting distance is in line with all of my other reels. Time will tell how it holds up after a few years of hardcore fishing, but so far it is been a solid reel for me.

Like I mentioned earlier they retail for $119.99, but they have frequent sales on the reel so make sure to check this link to see if you can snag one for a lower cost. At the time of this post, it is selling for $95.99.

Here are some of my thoughts on all of the rods and reels I have used from Cadence.